Tiffany serves as both the Assistant Director of the Center for English as a Second Language and International Student Coordinator for the College for Arts & Sciences.  She manages administration of the ESL programs, while also recruiting international students from partner universities throughout the world.

Tiffany has been with the College of Arts & Sciences since 2018, beginning as an ESL Instructor, where she developed a New Student Orientation that continues to be used today.  She has taught ESL at other universities, including Washington, DC’s esteemed LADO International Institute, where she was trained, and for multiple governmental contracts abroad.  She has also worked as a Spanish/English interpreter in Spain, Costa Rica and Kentucky.

Tiffany studied abroad in Cordoba, Argentina in 2005.  She worked as an intern for the Association of American Chambers of Commerce in Latin America, in Washington, DC in 2006.  She was a university student teacher of Spanish and Portuguese, as part of her comparative teaching methodologies thesis. She received her bachelor’s degree from the University of North Carolina at Asheville in 2008.

Tiffany is exploring all Kentucky has to offer with her two children and husband.  She has an extensive background in theater, in English and Spanish, and enjoys studying languages and traveling. 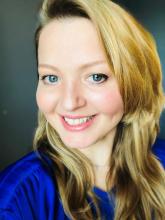