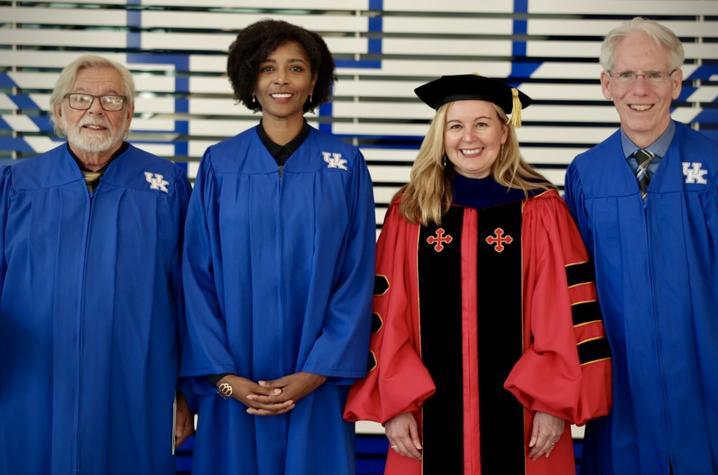 LEXINGTON, Ky. (Oct. 6, 2022) — Three alumni and one faculty member were inducted into the University of Kentucky College of Arts and Sciences Hall of Fame at a ceremony held on campus Friday, Sept. 30.

The hall of fame recognizes UK Arts and Sciences alumni and faculty who have made meaningful contributions to the university, the Commonwealth and the nation in their respective fields.

“We are honored to recognize and celebrate our stellar class of inductees; La Tasha Buckner, Dennis McCarty, Cythnia 'Didi' Rapp and Dwight Billings, who are some of our most distinguished alumni and faculty,” said Ana Franco-Watkins, dean of the College of Arts and Sciences. “Our honorees’ life stories reflect the power and purposefulness of their arts and sciences education as well as their ability to positively impact their professions, their communities, the Commonwealth and the nation.”

La Tasha Buckner, originally from Glasgow, Kentucky, serves as the chief of staff and senior counsel to Kentucky Gov. Andy Beshear. She graduated from UK with a bachelor’s degree in psychology in 1997; she also was in the honors program and was a four-year recipient of the William C. Parker Scholarship. She then earned her J.D. at the UK J. David Rosenberg College of Law in 2000, where she was a Bert T. Combs Scholar.

Buckner began her legal career as an assistant Commonwealth’s attorney, prosecuting cases ranging from white collar crime to murder. She served as deputy executive director for the Public Protection Cabinet’s Office of Legal Services, practicing in such diverse areas as alcoholic beverage control, horse racing and financial institutions. From 2016 to 2019, she headed the Civil Division for Beshear, who was then attorney general. She litigated some of the more notable constitutional cases in recent Kentucky history dealing with pension reform and budget cuts to state universities.

Buckner is the first Black American and the first woman to serve as chief of staff for the governor of Kentucky, the first Black woman to serve as general counsel to the governor and the first person to hold both positions simultaneously. As general counsel, she argued before the Kentucky Supreme Court, securing a unanimous win upholding Beshear’s authority to issue executive orders during the unprecedented COVID-19 pandemic.

As chief of staff, Buckner has played critical roles in key accomplishments, including the single largest investment in Kentucky’s history: Ford Motor Co. and SK Innovation’s $5.8 billion plan to build electric vehicle battery plants; restoring voting rights for 170,000 Kentuckians; and removing the statue of Jefferson Davis from the Capitol Rotunda. Her hobbies include hiking, traveling, attending concerts and supporting the arts.

Dennis McCarty, Ph.D., a professor emeritus at the Oregon Health and Science University-Portland State University School of Public Health, was born in Chicago as the eldest of six children. His family moved from Illinois to Wisconsin and settled in Louisville, Kentucky. He earned a bachelor’s degree in psychology at the University of Kentucky in 1971 and continued to complete master’s (1976) and doctoral degrees (1978) in social psychology; he met his wife, Sarah, as a classmate in the psychology graduate program. His postdoctoral training in alcohol studies occurred at the University of North Carolina Medical School. He has studied the prevention and treatment of substance use disorders throughout his career.

In Portland, McCarty assesses the organization, financing and quality of prevention and treatment services for alcohol and drug use disorders. He served as a principal investigator for the Western States Node of the National Drug Abuse Treatment Clinical Trials Network (2002-2018) and for the evaluation of the Network for the Improvement of Addiction Treatment (NIATx) and a series of NIATx extensions (2002-2018). He also led an assessment of the impacts of Oregon’s Coordinated Care Organizations on prevention and treatment for alcohol and drug use disorders (2014-2019).

McCarty served as a member of the Oregon Alcohol and Drug Policy Commission and the Lines for Life’s Oregon Coalition for Responsible Use of Medication initiative. He was the academic director for the University of Amsterdam’s Summer Institute on Alcohol, Drugs and Addiction — a two-week course that examined Dutch policy perspectives on drug use disorders. As the director of substance abuse services for the Massachusetts Department of Public Health (1989-1995), he collaborated with Massachusetts Medicaid to expand access to outpatient and detoxification services. His honors include a Lifetime Achievement Award from the Alcohol, Tobacco, and Other Drugs Section of the American Public Health Association (2012) and fellow status in the College of Problems on Drug Dependence (2019) and the American Psychological Association (2007). In his spare time, he and his wife enjoy birding and wildlife watching.

Cynthia “Didi” Rapp spent four decades as a public servant, almost all of it with the Central Intelligence Agency. Brought up in the northern Virginia suburbs of Washington, D.C., she came to Lexington in part for its beauty and horses, and stayed to earn an undergraduate degree in Russian studies in 1975 and a master’s degree in political geography in 1978. Rapp then joined the CIA as a geographic analyst, but for much of her analytic career, she covered a range of intelligence issues in the former Soviet Union, the Middle East and Europe. She and her husband — also a career CIA analyst — served in several overseas assignments.

Entering management, Rapp oversaw the production and content of the President’s Daily Brief, the intelligence community’s premier analytic product. She then moved back into analysis to take responsibility for the CIA’s Middle East analytic program. After that assignment, Rapp rose through a series of executive positions of increasing responsibility. She served as deputy director of Congressional Affairs and then as the first assistant deputy director of National Intelligence for Intelligence Integration. Later she returned to the CIA as director of Public Affairs and then as the senior analytic representative in a European capital. Back in Washington, she worked as deputy chief operating officer for the CIA and later as director for analysis, running the CIA’s global analytic program. She closed out her career as the chief of staff for the director of the CIA.

She credits her time at UK, particularly her experience with a tough history professor, with instilling in her the drive for excellence and persistence in overcoming challenges that helped her succeed as an analyst, senior executive and leader at the CIA.

Dwight B. Billings, Department of Sociology

Dwight Billings, Ph.D., professor emeritus of sociology, has been a pioneer in Appalachian studies and the examination of inequality in the region. He was born in Logan, West Virginia, in 1948 and moved to Beckley when he was 10. In Logan, he attended an elementary school that was segregated not only by race but by occupation, which inspired him to pursue research into race and class inequality. Both Logan and Beckley were sites of deadly coal mining accidents as well as intense labor conflicts, and throughout his career he has been interested in and supportive of labor struggles.

He joined the UK faculty in 1975 and earned his doctorate in sociology from the University of North Carolina in 1976. As an assistant professor, he helped to establish the UK Appalachian Center and the Appalachian Studies Program. He served as the center’s first research director, the first director of Appalachian Studies and as associate director and acting director. Having taught at UK for 43 years, he earned the UK Chancellor’s Outstanding Teaching Award in 2000 (for tenured faculty), the 2003 Distinguished Professor of the College of Arts and Sciences award, and the 1993-94 UK Research Professor Award.

Outside of UK, he has served as the president of the Appalachian Studies Association, vice president of the Southern Sociological Society and editor of the Journal of Appalachian Studies. He and his former UK sociology colleague, Kathleen Blee, won the Weatherford Award for best nonfiction book on Appalachia for “The Road to Poverty: The Making of Wealth and Hardship in an American Region.” To acknowledge his mentorship, teaching and service, the Department of Sociology established a graduate student scholarship in his honor called the Billings-Hougland Scholarship (Sociology Legacy Fund).

This year's honorees join more than 60 alumni and 20 faculty members who were previously inducted. More information about the inductees as well as videos and photos from the event can be found at www.as.uky.edu/halloffame.

The University of Kentucky is increasingly the first choice for students, faculty and staff to pursue their passions and their professional goals. In the last two years, Forbes has named UK among the best employers for diversity, and INSIGHT into Diversity recognized us as a Diversity Champion four years running. UK is ranked among the top 30 campuses in the nation for LGBTQ* inclusion and safety. UK has been judged a “Great College to Work for" three years in a row, and UK is among only 22 universities in the country on Forbes' list of "America's Best Employers."  We are ranked among the top 10 percent of public institutions for research expenditures — a tangible symbol of our breadth and depth as a university focused on discovery that changes lives and communities. And our patients know and appreciate the fact that UK HealthCare has been named the state’s top hospital for five straight years. Accolades and honors are great. But they are more important for what they represent: the idea that creating a community of belonging and commitment to excellence is how we honor our mission to be not simply the University of Kentucky, but the University for Kentucky.