by Sarah Geegan and Derrick Meads

The University of Kentucky has emerged as a leader in advancing its land grant mission into the 21st century.

A mission that serves to improve the lives of Kentucky citizens through education, research, creative work, service and health care extends beyond the borders of the Commonwealth. Since the 1950s UK has become increasingly involved in aiding other countries in developing successful higher education systems as well as other capacities. These partnerships open opportunities for research, innovation and global experience, benefitting UK students and the state of Kentucky. 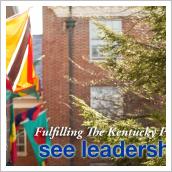 The University of Kentucky’s experience as a land grant institution in a state that struggled with low-income agriculture and subsistence living in the 1930s and 1940s created a wealth of research and experience in sustainable development. This knowledge formed the foundation from which UK assisted communities around the world and became a leader in international capacity building.

Capacity building is an approach to development that identifies the obstacles that prevent people, governments and nongovernmental organizations from realizing their goals; then partners with them to build knowledge, develop skills, and restructure organizations so they can devise creative solutions to development challenges and respond to new challenges as they arise.

Although the term “capacity building” did not emerge in the lexicon of international development until the 1990s, UK’s first capacity building project began when it was selected by the U.S. Foreign Aid Program (now known as USAID) and the government of Indonesia. The project involved  aiding the development of two early Indonesian universities: the Institute of Technology at Bandung and the Institute Pertanian Bogor.

During the 10-year life of this project, faculty and staff from the colleges of Agriculture, Arts & Sciences, and Engineering served in Indonesia.

“By introducing U.S. higher education models, many more Indonesians were able to benefit from higher education," Massey said. "UK also trained Indonesian agricultural scientists and workers, which played a significant role in increasing Indonesia’s rice production to the point that the country was self-sufficient.”

UK has continued to build upon its partnership with Indonesia, most recently through its participation in a $19.7 million project, funded by USAID, which began in 2011. The Higher Education Leadership and Management (HELM) project will develop leadership and management skills in finance, general administration, evaluation and external stakeholder cooperation.

Through partnerships with funders, such as the Asian Development Bank, USAID, USDA, PEPFAR, the Bill and Melinda Gates Foundation, NIH/NICHD, and the U.S. Embassy/Baghdad, UK has accomplished many successful capacity building projects in Latin America, Sub-Saharan Africa, the Middle East, Central/Eastern Europe, Iraq, as well as Central/South and Southeast Asia.

UK’s leadership is also evident in its role as one of the founding partner institutions in the Iraq University Linkages Program (ULP), funded by the U.S. Embassy in Baghdad. This program, which began in 2010, is working with Kufa University, located in Iraq’s Najaf Province, to develop curriculum, introduce state-of-the-art pedagogy and provide professional development opportunities to Kufa’s faculty members.

Gaffield said that UK’s capacity building work not only helps communities overseas, but is also critically important to its land-grant mission, improving the lives of Kentucky citizens through education, research, creative work, service and health care.

“For our students to succeed – and for Kentucky to continue to succeed – our graduates must be capable and comfortable in an international environment,” Gaffield said. “The University of Kentucky is working every day to forge relationships overseas that are opening new markets to Kentucky companies and making possible cutting-edge research that will directly benefit the Commonwealth, its businesses, and its citizens.  UK is a model for how a land-grant university fulfills its mission in the 21st century.”

UK’s international work spans its 16 colleges. The College of Agriculture has the longest history of work overseas, whereas the colleges of Arts & Sciences, Communication and Information, Engineering, Education and the Martin School of Diplomacy have also done extensive capacity building work abroad. These capacity building efforts span the fields of:

In 2005, UK participated in USDA's project, "Improving Agricultural Education in the Republic of Georgia." UK worked with the Georgia Institute for Public Affairs (GIPA) to improve the quality of three of the Republic of Georgia's agricultural colleges by developing new courses, improving teaching methods, introducing assessment measures, applied research and extension programs.

UK's College of Allied Health Professions (now Health Sciences), along with the UK Center for Excellence in Rural Health and the Kentucky Department for Public Health formed a health care partnership with Russia in 1999. Funded by USAID and coordinated by the American International Health Alliance (AIHA), this partnership has helped the community of Pereyaslavska to identify health needs and to plan services that meet those needs.

In 2001, the College of Public Health received an award to lead a consortium of Kentucky health care institutions, in partnership with institutions in Romania, to develop educational programs in health care management and health communications. The AIHA and USAID funded the partnership.

In 2002, the University of Kentucky created "Shoulder to Shoulder Global," an organization involving faculty members, staff, local clinicians and students to participate in a range of activities in Santo Domingo, Ecuador. It manages a year-round health clinic, Centro Medico Hombro a Hombro, in the community of Carlos Ruiz Burneo, and sends brigades of Kentucky volunteers several times a year to three sites in Ecuador.

In collaboration with the American International Health Alliance's Twinning Center and with the support of President's Emergency Plan for AIDS Relief (PEPFAR), the University of Kentucky formed a partnership, in 2007, with the Zambia Institute of Mass Communication, ZAMCON, a media-training institute in Lusaka, Zambia.

In 2009, the College of Communication and Information created the Dissemination and Implementation Sciences Consortium (DISC) to respond to demands for increased knowledge application and accountability in health care and other practice settings by conducting research, and by developing and testing dissemination and implementation models that will more effectively promote innovation in communities abroad.

“Matching UK's strengths to these global projects is a way to help communities develop long-lasting structural improvements," Susan Carvalho, associate provost for international projects said. “The legacy built by this work has led to new, meaningful partnerships that will provide our students with rich opportunities for inquiry, discovery and service that will benefit the university, the Commonwealth, and the world.”