The announcement was made during a news conference and ribbon cutting on the grounds of the facility this morning with Gov. Steve Beshear, Kentucky Energy and Environment Cabinet Secretary Len Peters, LG&E and KU Energy Chairman, CEO and President Victor Staffieri, University of Kentucky President Eli Capilouto, and other dignitaries and industrial partners in attendance. 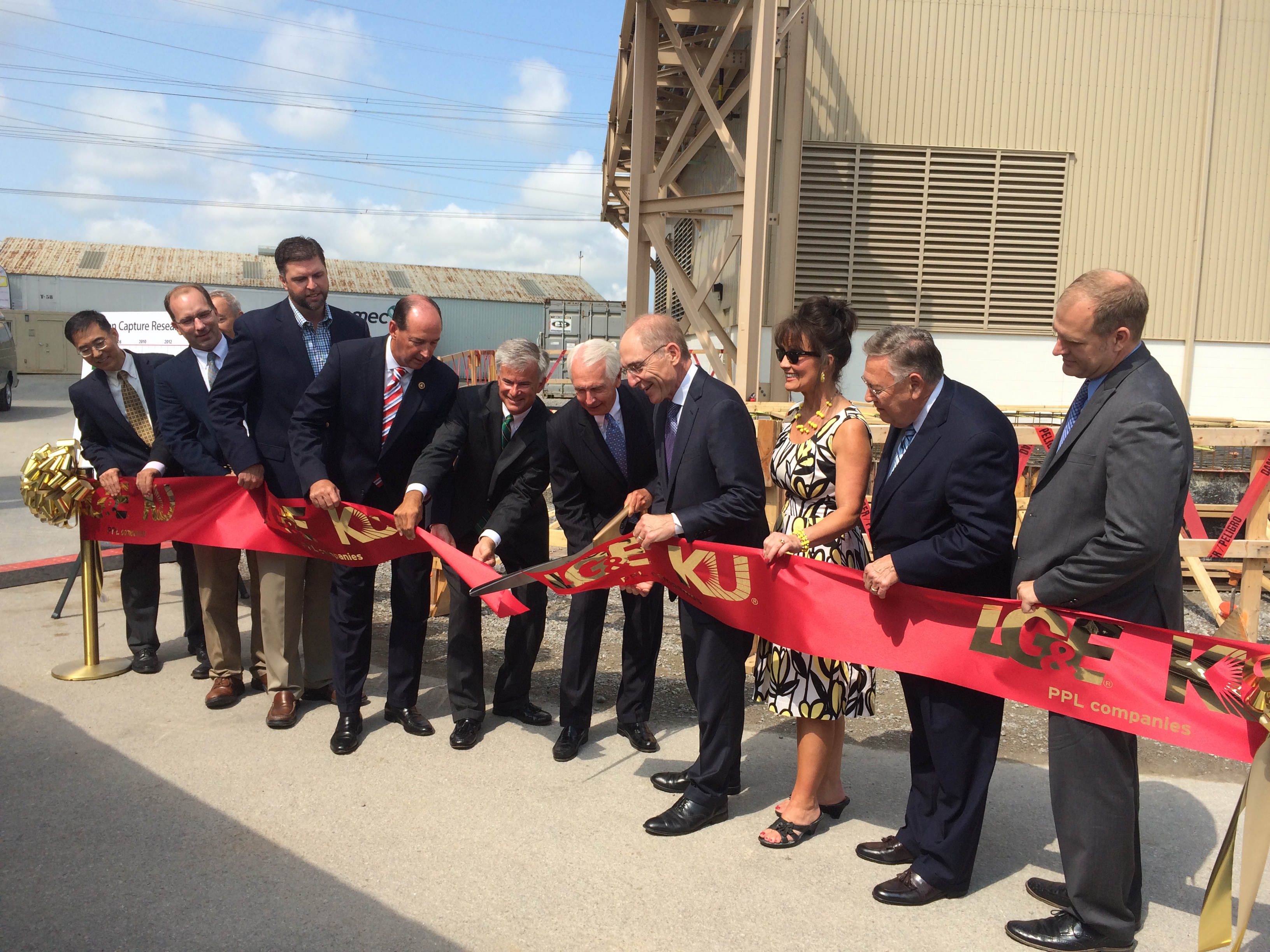 The $19.5 million project with the University of Kentucky Center for Applied Energy Research is made possible through a $14.5 million competitive financial assistance award from the U.S. Department of Energy’s National Energy Technology Laboratory and cost-share funding from UK, the Kentucky Department of Energy Development and Independence, the Carbon Management Research Group (CMRG) utility members, and project team members including the Electric Power Research Institute and Mitsubishi Hitachi Power Systems America.

The focus of this “catch and release” style pilot system will serve to demonstrate improvements in the integration of carbon capture technology at an existing power plant, produce key discoveries with the goal of developing a safer, more efficient process, and test the feasibility of ideas and technologies for the integration of commercial-scale carbon capture systems.

Construction of the two megawatt thermal post-combustion carbon dioxide capture pilot system is expected to be complete this fall, shortly followed by the testing period. Key discoveries will be determined after testing is finished in mid-2016.

“This project is the next phase in a partnership between LG&E and KU and the University of Kentucky that began back in 2006, when our company committed $1.5 million to CAER for research into the reduction of greenhouse gases,” said Staffieri. “In 2006, there were no regulations on carbon emissions, but we recognized the importance of this research for our company and our Commonwealth. That’s why we continue to invest in these types of projects, which explore ways to make a difference for both our industry and future generations.”

Beshear applauded the ingenuity and purpose behind the project. “Generation of energy, affordable energy and the jobs energy provides all play a key role in the health of Kentucky’s economy,” he said. “The project we’re celebrating today and the partnership that made it possible show our state and its utilities are working together to maintain our livelihood and find solutions to the challenges posed by ever-increasing carbon constraints.”

“Coal has been the lifeblood of Kentucky and the most affordable fuel for energy generation for some time, but economic and regulatory pressure is changing the role coal has played in the energy landscape of Kentucky,” said Eli Capilouto, University of Kentucky President. “As we look toward the future of energy generation, the research results from the carbon capture projects like this provide our electric utilities with valuable information to determine whether these technologies are feasible for commercial-scale operations and can allow coal to be a viable energy source moving forward.”

"This project reinforces coal as part of the president's 'All of the Above' strategy, and underscores the viability of coal as part of America's low-carbon economy," said Julio Friedmann, deputy assistant secretary for clean coal and carbon management at the U.S. Department of Energy. 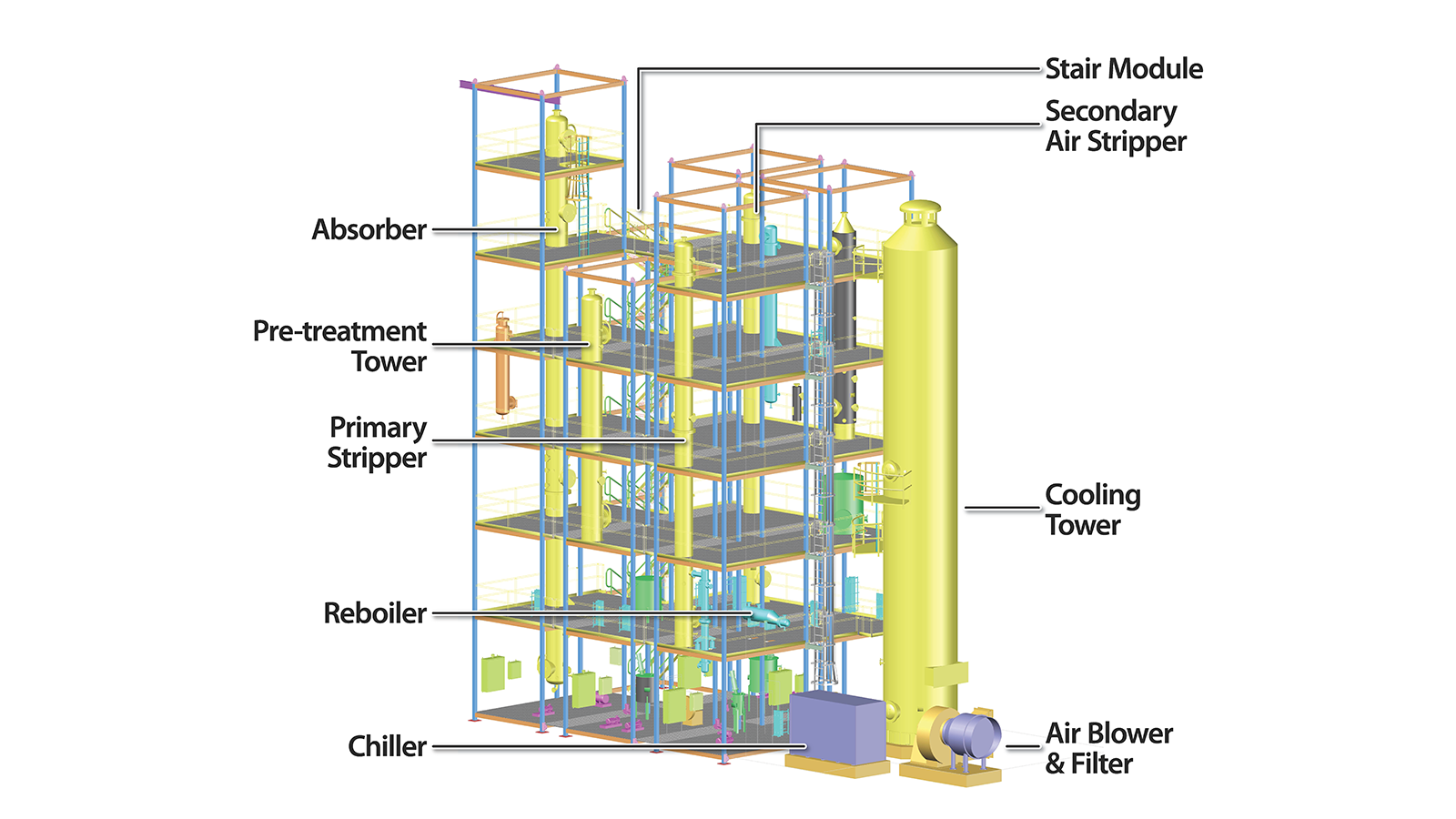 flue gas just before the gas enters the stack. From the sampling port, the flue gas will move into modules where its interaction with a liquid solvent will extract CO2 from the flue gas. The resulting flue gas, now carrying less than 2 percent CO2, exits the absorber and returns to the stack. The liquid solvent carrying the removed CO2 is put through a two-stage process that boils off the carbon to produce a concentrated stream of CO2. The solvent is recycled to the absorber to process more flue gas. In commercial applications, the concentrated CO2 stream would then be compressed and piped for utilization or storage. In this “catch and release” research project, however, UK will perform detailed analyses of each process, then reintroduce the concentrated CO2 stream into the flue gas.

The system will consist of six modules connected side by side on a 2-by-3-foot grid. Each module measures about 160 square feet across and stands between 55 to 75 feet high.

In 2006, LG&E and KU Energy committed $1.5 million over three years to CAER to support carbon management research – including technologies to separate, capture and store carbon dioxide emitted by coal-fired power plants. In 2008, building on research initiated by LG&E and KU Energy’s support, CAER created a consortium with government agencies, electric utilities and their research organizations to seek cost-effective technologies to reduce and manage carbon dioxide emissions from coal-fired power plants.

The consortium, now known as the Carbon Management Research Group, splits the cost of research of large-scale carbon dioxide capture systems, which often has shown to be too expensive and high-risk for a single utility or government agency to undertake. Each of the CMRG’s previously mentioned partners contributes $200,000 a year. The Kentucky Department of Energy Development and Independence also contributes funding in the form of a one-to-one match up to $1 million annually, as approved by the Kentucky General Assembly in the biannual budget.