Two UK Arts & Sciences geology graduates who learned that they share quite a bit in common are working together to share what they’ve earned in their careers with current students interested in science.

Both Cara Hollis and Susan Eriksson grew up in small towns in Kentucky and found their way into geology almost by accident. Both women understand the challenges of studying and working in a field that has been led primarily by men in the past.

So when Hollis and Eriksson met by chance at a UK alum picnic outside Denver, Colo., several years ago and started sharing their backgrounds, the pair realized that they might be able to find a way to give back to their university if they joined efforts.

The two created the Advancing Science for Kentuckians, or ASK, endowment which provides scholarships for full-time earth and environmental science students who display financial need and who are at least sophomores. Hollis and Eriksson initially pledged $10,000 but the amount has grown beyond that and the two hope others might help grow the endowment in the future, according to Eriksson.

“My time at the University of Kentucky was such a jaw-dropping experience, coming from someplace like Carter County,” Hollis said. “It completely changed my direction in life and I recognize that I was fortunate to get that experience. It’s so tough to be able to afford going to school and if I can help someone else, that’s what I want to try to do.”

Hollis started at UK as a biology major but by accident, she ended up in a geology class.

“It was the luckiest thing that could have happened to me,” she said. Hollis now lives in Houston, Texas, where she has been in the oil and gas industry for 11 years and worked at ION Geophysical for the last six years.

“I’m very lucky because I’ve been able to travel to about 30 different countries to speak with people through my job,” Hollis said. “The world just opened up through what I learned at UK. But the thing is, in many of those meetings, I’m still the only or one of the only women there. I’d like to see how I might help change that.”

While the ASK endowment is not just for female students, Eriksson said she’d also like to see some preference given to young women interested in science.

“I was really the only female undergraduate in geology at UK while I was there,” she said. “It’s traditionally a male-dominated field. While that’s changed some, I would still love to do what I can to encourage young women to pursue science.”

Like Hollis, Eriksson didn’t start out as a geology major. When she came to UK from Lincoln County, Ky., Eriksson was a music major who planned to study piano. But after taking an honors section of geology as a junior, she changed directions. 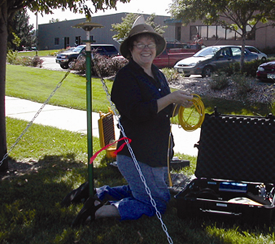 “It was just so exciting,” she said of geology. “Science is problem solving and the Earth is such a cool place. If you have an inquisitive mind, you will be drawn in to science.”

After completing her bachelors, in geology, in 1971, Eriksson earned a master’s degree in geology at SUNY-Stony Brook and a doctorate at the University of the Witwatersrand in South Africa. She worked as a research geologist at Arco Oil and Gas in Dallas, Texas before leaving the industry for a faculty position at Virginia Tech.

Since 2004 Eriksson has been the education and outreach director for UNAVCO, a research facility funded by NSF and NASA that focuses on the study of deformations in the Earth’s crust.

Both UK graduates credit strong female role models as reasons for their success in science.

For Hollis, it was her high school biology teacher, Teresa Marshall.

For Eriksson, it was her mother, Dorothy Cook Camenisch. Camenisch was a graduate of UK’s home economics program.

“My mother was such a strong influence on me,” Eriksson said. “She was so passionate for subjects like chemistry and she really instilled in me a sense of how exciting it is to learn new things.”

Those two women allowed Hollis and Eriksson to find tangible success in their careers and the two UK graduates would like to do the same for other students in the future.

“We both come from Kentucky, we both love Kentucky. It’s our home, even if we both live in other parts of the country now,” Eriksson said. “At the same time, we are very aware of the education situation in Kentucky and we want to make sure others have the same opportunities to be successful that we had. We want to leave behind something that has tangible results.”

Through the ASK endowment, Hollis and Eriksson have been able to pay the tuition of one student a year for the past two years, Eriksson said. The plan is to be able to afford to do more once the endowment grows.

“I think UK is a place where an aspiring person in Kentucky will do well and if we can help them afford to do that, great,” she said.

“Not only did I get a great education at UK, I got some good life experience,” Hollis said. “There were inspiring professors and people willing to provide a little guidance. I’m very happy we can help future scientists to get a chance at that experience.”