Cracking the Code of Masculinity

Betsy Dahms has known since her childhood that masculinity can mean a variety of things. Growing up with eight brothers and one sister, Dahms developed an acute awareness that a person’s masculinity can never be reduced to a single form or expression. It is this aspect of her family upbringing that has most significantly influenced Dahms’ budding scholarly and pedagogical career.

“My father died when I was young, so I didn’t grow up with a father-figure in my life,” said Dahms.“In my house I was able to see how my brothers were treated versus how my sister and I were treated, and I often thought to myself, ‘wow, that’s different.’”

This disparate treatment did not end when Dahms left her Northern Kentucky childhood home.As an adult, Dahms has faced criticism because she’s done things typically coded as masculine. She and her partner built the house where they now live with their two young daughters. 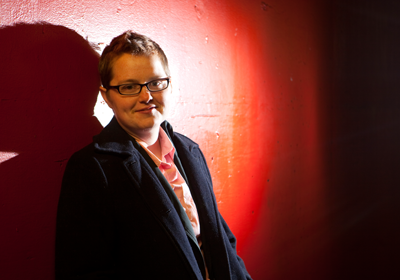 “My mother scoffed at me and asked me what I was doing when I told her I was building a house,” said Dahms.“But there’s no biological reason why I can’t mix mortar.”

The distinctions between men and women, the socially-imposed expectations that dictate what it means to be a man and a woman, and the related injustices these expectations can cause have compelled Dahms, a Ph.D. candidate in Hispanic Studies, to expand her intellectual focus and begin teaching an Introduction to Masculinities course for the Department of Gender and Women’s Studies at the University of Kentucky.

“Gender and Women’s Studies spends much time thinking about how women perform gender and how we understand that as a process,” said Dahms. “It’s encouraging that our undergraduate curriculum creates a space where we can concentrate on the fact that men are gendered creatures too. We need to examine what societal factors affect how men become men and express their gender.”

And for Dahms, teaching masculinities is the perfect forum to engage the questions she believes are so important for our society to ask.

Dahms’ Introduction to Masculinities course, which she designed with Dr. Susan Bordo and Dr. Cristina Alcalde, familiarizes students with masculinity studies, a relatively new but rapidly expanding field that develops a feminist approach to the study of what it means to be a man.Dahms created a synthesis of the many publications in masculinity studies that have appeared in the last decade, and she organized her course according to distinct themes and institutions that directly influence the social construction of gender.

“We almost never see penises in our popular media and culture,” said Dahms. “I want my students to consider how the media depicts penises and think about the ramifications of these depictions and allusions.” 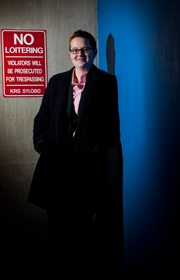 Dahms earned a Graduate Certificate in Gender and Women’s Studies, which not only prepared her to teach within the Department, but also influenced her own graduate research.Dahms’ dissertation will investigate representations of Gender in Chicana (Mexican American) cultural production.She will explore how  “female masculinity,” a term borrowed from Judith Halberstam, is represented in Chicana literature and performance art. Three institutions, the family, the church, and formal education, figure heavily into her analysis of external systems that stipulate what gender should be.

For Dahms, the interdisciplinary makeup of Gender and Women’s Studies is a benefit to her teaching and research, and she believes that the diverse intellectual background and interdisciplinary connections enrich her work.

Dahms sees the approach she’s garnered from studying masculinities as a segue to many other efforts, including her commitment to furthering the intellectual life of her community. Dahms will present a film viewing of "Set it Off" that invites viewers to make practical applications about the gender theory she’s culled in her graduate research and teaching.

“You could watch this film, which depicts four females as bank robbers, and classify it as just another action flick with a twist,” said Dahms.“Or, you could watch it and ask, ‘What are the institutions that influence these characters and force them to resort to violence?What are their options for legal income?How is their performance influenced by class and race in addition to gender?’” According to Dahms, dislocating masculinity from the male body in this film accentuates masculinity as a social construction and shows the theatricality of urban African American masculinity performed by men in similar movies of the same genre.

Perhaps this is the most important revelation of masculinity studies, and Dahms is glad her students respond positively and critically to thinking about themselves as gendered beings.