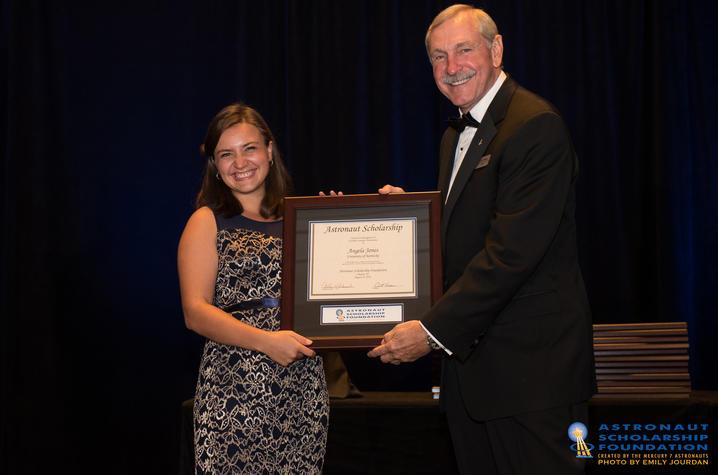 University of Kentucky Office of Nationally Competitive Awards has announced biology and chemistry senior Angela Jones is one of 2019’s 52 recipients to be awarded a $10,000 scholarship from the Astronaut Scholarship Foundation (ASF). The ASF Scholarship is presented annually to outstanding college students majoring in science, technology, engineering or math (STEM).

A nonprofit organization, ASF was established by the Mercury Astronauts in 1984. Its goal is to aid the U.S. in retaining its world leadership in science and technology by providing scholarships for exceptional college students pursuing degrees in these fields. Since that time, astronauts from the Gemini, Apollo, Skylab and Space Shuttle programs have joined in this educational endeavor. UK students have earned a total of $191,000 from the ASF since 1998.

The daughter of Marc and Roberta Jones, of Attica, New York, Angela Jones is a member of Lewis Honors College majoring in biology and chemistry with a biochemistry emphasis in the College of Arts and Sciences.

"I've always been interested in biology and how living things function," Jones said. "Seeing how life works at the molecular level is what drew me into biochemistry as well. The combination of the two majors helps me see more of the full picture of life from the macro scale of biology and the micro scale of chemistry."

Active in undergraduate research at UK, Jones has helped examine the population genetics of the tiger salamander species complex in the lab of David W. Weisrock, associate professor of biology. Based on this research, she was awarded a Summer Research Grant at UK, presented at the National Conference for Undergraduate Research, and was invited to present at the 2019 national conference for the Society for the Study of Evolution.

In addition, Jones has worked in the lab of Alumni Association Endowed Professor of Biological Chemistry D. Allan Butterfield, where she has studied the effects of ApoE4 in Alzheimer's disease pathology via the pentose phosphate shunt. Work in this lab resulted in Jones receiving departmental honors in chemistry.

Jones credits both Weisrock and Butterfield as mentors and influences on her interest in science, as well as many of her family members. Her father is a retired pharmacist, her mother a physical therapist assistant, her oldest sister a doctor of optometry and her other sister recently earned her doctorate in veterinary medicine from Cornell University.

When she isn't studying science, the Chellgren Fellow is pursuing a minor in piano performance and plays clarinet in the Wildcat Marching Band.

Upon completion of her bachelor's degrees in 2020, Jones plans to pursue a doctorate in genetics. She is particularly interested in advancing her studies in the genetics of disease and cancer.

Jones applied for the Astronaut Scholarship through the UK Office of Nationally Competitive Awards, part of the Chellgren Center for Undergraduate Excellence within the Division of Student and Academic Life at UK. The Office of Nationally Competitive Awards assists current UK undergraduate and graduate students and recent alumni in applying for external scholarships and fellowships funded by sources (such as a nongovernment foundation or government agency) outside the university. These major awards honor exceptional students across the nation. Students who are interested in these opportunities are encouraged to begin work with the office's director, Pat Whitlow, well in advance of the scholarship deadline.

The University of Kentucky is increasingly the first choice for students, faculty and staff to pursue their passions and their professional goals. In the last two years, Forbes has named UK among the best employers for diversity, and INSIGHT into Diversity recognized us as a Diversity Champion three years running. UK is ranked among the top 30 campuses in the nation for LGBTQ* inclusion and safety. UK has been judged a “Great College to Work for" two years in a row, and UK is among only 22 universities in the country on Forbes' list of "America's Best Employers."  We are ranked among the top 10 percent of public institutions for research expenditures — a tangible symbol of our breadth and depth as a university focused on discovery that changes lives and communities. And our patients know and appreciate the fact that UK HealthCare has been named the state’s top hospital for four straight years. Accolades and honors are great. But they are more important for what they represent: the idea that creating a community of belonging and commitment to excellence is how we honor our mission to be not simply the University of Kentucky, but the University for Kentucky.