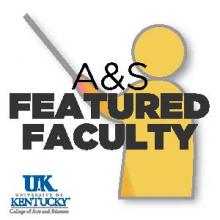 At the beginning of the Fall 2011 semester, we met with all of the new faculty hires in the College of Arts and Sciences. This series of podcasts introduces them and their research interests. Melissa Stein is an assistant professor in the Department of Gender and Women's Studies and researches scientific and cultural constructions of the body around race, gender, and sexuality.

Figure 1. Citizenship and the Bearded Caucasian. In the nineteenth century, citizenship was tied to manhood, both legally and culturally. In John Van Evrie’s view, only white men had “bushy, flowing beards” and therefore they alone were truly men. This illustration, from his “Six Species of Men” (1866), offered visual support for his claim; while the men of other races are drawn outdoors, with sparse or no facial hair, the bearded “Caucasian” is surrounded by the trappings of civilization. Accordingly, Van Evrie argued “If [the Freedmen’s Bureau] expect to make something of Sambo, they must strike for ‘equal beard’ for him as well as ‘equal voting.’” (Illustrations, John Van Evrie’s The Six Species of Men, 1866).

Figure 2. The Race of Manhood and the Permanence of Race. With this illustration, New York physician and proslavery propagandist John Van Evrie sought to demonstrate that the physical—and, by implication, mental—character of the white and black races remained unchanged over time. As was often the case in ethnology (the nineteenth-century "science of race"), the black figure was presented in profile, to emphasize both his supposedly simian facial angle and sloping forehead, interpreted as indicative of lesser intellectual capacity. Moreover, that the ancient and modern Caucasian figures were drawn with beards, in sharp contrast to their smooth-faced black counterparts, served to support Van Evrie’s frequent rhetorical connection between beards, manhood, and political capacity. (Frontispiece, John Van Evrie’s Negroes and Negro “Slavery,” 1861).