At age seven, Peyton Fouts,’06, wanted to change the world. And he’s been working toward that goal since.

At that young age, he saw a girl on TV carrying one brother and dragging another (who was dead) by the hand in the sand. “She had been orphaned by AIDS and my heart broke. I knew I wanted to change their circumstances and I just kept seeing people around the world who needed help.”

Fouts, a Lexington, Ky., native, grew up in a family of six children. The son of a teacher (mother) and lawyer (father), he has an older sister and four younger brothers.

When Fouts graduated high school from Lexington Christian Academy in 2003, he enrolled at the University of Kentucky, earning two degrees in just three years at age 19. 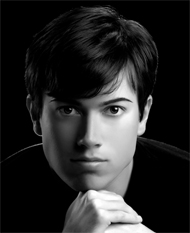 While at the University of Kentucky, Fouts decided to plow through his coursework to graduate early. “I was at UK for three years and I took 24 credits per semester, so I really didn’t have much time for extracurricular activities, but I love the UK basketball team, I love the school spirit, the fans, the excitement and pride that UK students and everyone else in Kentucky has in the school and our teams,” he said.

Fouts recalled the best part of his education was “that it afforded me the opportunity to organize my classes to allow for graduating early and think ‘big.’ My education at UK allowed me to see my own potential. At smaller schools, I couldn’t have graduated in the timeframe I did and I wouldn’t be in the same city I grew up in and where my friends and family live. It was a perfect match for me, and I’m proud to say I graduated from UK,” Fouts said.

He noted several professors, including Cassie Fetters and Tom Marksbury from the Department of English, “who took a lot of interest in me professionally and academically. They are all special people to me and things they’ve said or taught stuck with me and helped mold certain decisions, even now.”

With his early goal still at play during and after college, he deduced the only way to change the world is with money. With that in mind, he built a website he thought could accomplish that goal. “It was never about ‘what should I do,’ rather, ‘how do I do it?’. I knew I couldn’t do anything behind a desk as I’m not one for routines. Everything fell into place and my strengths matched up with what I need to fulfill my goal of helping people like the girl I saw in Sudan,” Fouts recounted.

He’s just launched OuiBox, a site that combines all social networks, all your photos, videos and music across the Internet and more, and it is all branded with the word “oui” (phonetically “we”). He said other applications like iPhone all begin with “i,” but his perspective is that “oui” can change the world with working together. He explained it also doubles as a marketing tactic that everything with Oui in front of it is copyrighted and trademarked to OuiBox.

Fouts said he built his entire life around his business. “I told myself I’d do anything to make this work and part of that is formulating a lifestyle that is conducive to being productive and creative. My family is my church high school guys I’ve been mentoring for the last four years and has been pretty much the only levity for the last period of my life,” he said.

“I had some ideas I thought were good enough, and so I worked alone and privately for months and years until I felt I was ready to bring in some experts. Then when they were impressed or thought it was good enough I’d continue to expand,” Fouts explained.

“This sort of silent optimism is what brought me to seeking investors and ultimately launching the product. I’m almost reclusive and I didn’t want to release anything or talk about any of this until I felt it was good enough for public consumption. My entrepreneurial path is different than most because generally people brainstorm and put together a team. Mine started with an idea that eventually others would champion,” he said.

He admits the success or failure of OuiBox, or any product he develops, is daunting because the success (or lack thereof) falls largely on his shoulders.

“I like that pressure. I’ve never liked being told what to do. For example, in school, I never liked to be told what paper to write. I wanted to write, but not if I’m being told. Same with working for yourself: I think you work much harder if it’s something you want to do, even if you’re not being paid for it,” he said.

All the while, his eyes are on the prize: changing the world.

“UK gave me education, but mainly UK gave me a larger world view and ‘life’ view. It made me think of how I can change the world and on the last day of my classes, it was the physical location I had first dreamt up OuiBox and was my launching pad.”

Matthew T. Patton, ’99, is a medical trade magazine editor and freelance writer based in Atlanta.