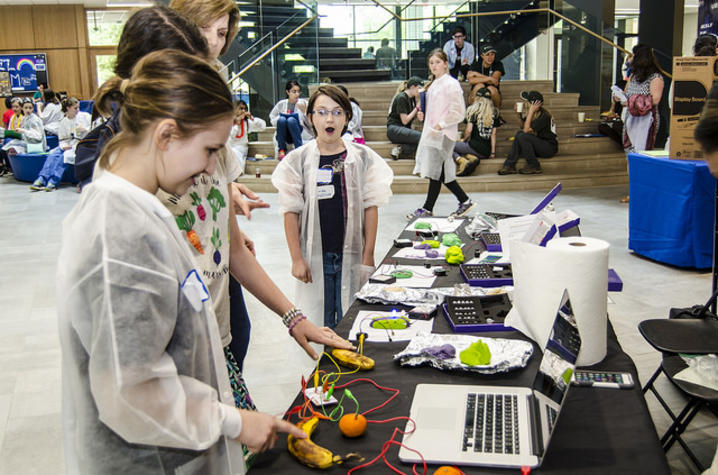 Middle school students are awed when they get the chance to turn a banana into a percussion instrument at the 2017 Expanding Your Horizons STEM workshop for girls.

Sometime during the transition from middle school to high school, girls often find their early interest in science and math steered in other directions, often toward careers that fit comfortably into a box of more “traditional” women’s roles. A recent daylong workshop at the University of Kentucky sought to stem that tide by introducing 120 Kentucky middle school girls to a challenging STEM career.

A multidisciplinary project, Expanding Your Horizons, focused on countermanding some of the possible reasons that girls’ interest in the sciences flag at a certain age, such as peer pressure or a lack of female role models. During the workshop, the young students met many female undergraduate and graduate students studying STEM disciplines at UK who introduced them to a large variety of topics, such as the ecological impact of trees, water treatment and purification, neuroscience, chemistry, electrical engineering and molecular gastronomy, just to name a few sessions that day. It was funded by a grant through the Kentucky National Science Foundation EPSCoR (Experimental Program to Stimulate Competitive Research) Program through an Education, Outreach, and Community Award. 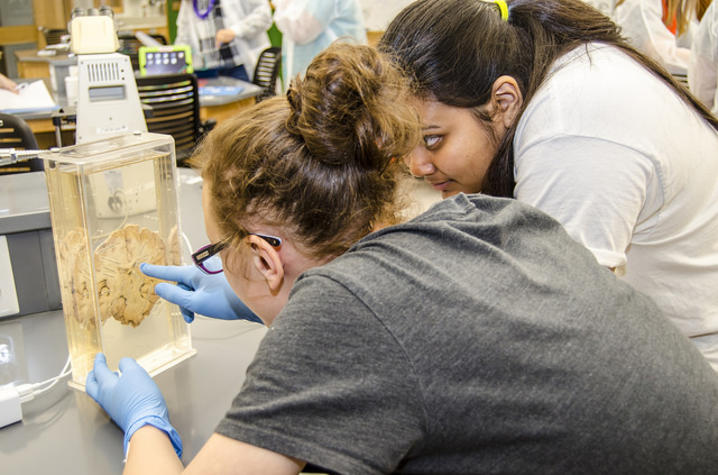 “Our goal is to give them a tiny taste of the great opportunities in science, technology, engineering and mathematics,” said Ellen Crocker, a postdoctoral scholar in the Department of Forestry in the UK College of Agriculture, Food and Environment, who was one of the event coordinators. “To open their eyes to some of the possibilities and introduce them to role models, young women who are just a little older than they are, to show them that those pathways are possible.”

Susan Odom, an Associate Professor in Chemistry in the UK College of Arts and Sciences, and Bradford Condon, postdoctoral scholar with University of Tennessee’s Department of Entomology and Plant Pathology and UK Department of Plant Pathology, also served as coordinators of the conference.  Christy Payne, an Associate Professor in Chemical Engineering, organized an Opportunities Fair, which took place over lunch.  About 20 organizations from campus and the Lexington community were represented.

Women continue to be underrepresented in STEM fields, making up only 24 percent of the workforce according to a study from the U.S. Department of Commerce. A U.S. Census Bureau publication states that African Americans and Hispanics have been consistently underrepresented in STEM employment. In 2011, only six percent of STEM workers were black and seven percent were Hispanic. 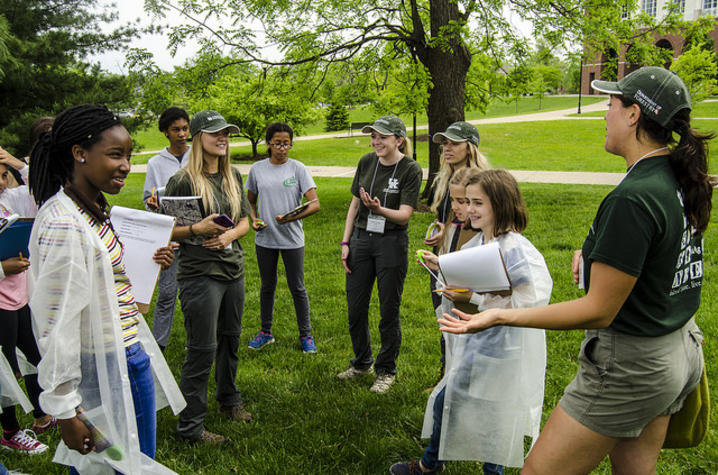 Catherine Denning is pursuing her doctoral degree in chemistry at UK. She was excited to participate in the workshop to share her experience and enthusiasm for her chosen field.

“We do have quite a few females in our department, and it’s actually an inspiring work environment,” Denning said. “What we don’t have a lot of, though, are minority females. I definitely think a workshop like this is going to help that issue. I never really saw a lot of black females in my science classes. For us, it wasn’t really pushed as strongly. Events like these, where girls can come together and look at other women in fields of science and think, ‘I can do this too,’ are very important.”

In the opening session, Crocker told the girls and their families that 20 percent of jobs today require a degree in one of the sciences, technology, engineering or math fields. In the future, however, it is predicted that 80 percent of new jobs will require a STEM degree.

“Why are you all here?,” Crocker asked the participants. “We need you. If we’re going to solve the world’s problems, if we’re going to find solutions to safe drinking water, healthy air, continue being a country that is a research powerhouse, we need the best and the brightest.”

For the better part of a Saturday, the widely diverse group of girls filled the halls of the new Don and Cathy Jacobs Science Building and immersed themselves in workshops led by UK students, who had been mentored by UK professors prior to the workshop. In one laboratory, a group of undergraduates introduced middle schoolers to water treatment. After contaminating water samples with substances like coffee grounds and lemon juice, the young students came up with a hypothesis on how a particular substance changes the water, then devised ways to remove the contaminant.

Outside, another group of students followed Amelia Baylon, Hunter Dykes, Emily Mastoroudis and Chloe Vorseth, seniors in the Natural Resources and Environmental Science degree program. As they ventured onto campus, they showed their charges how to measure a tree’s diameter and, from that, determine its value in the landscape, including how much storm water it intercepts, how much energy it conserves, the amount of carbon it sequesters and what it adds to the property value. 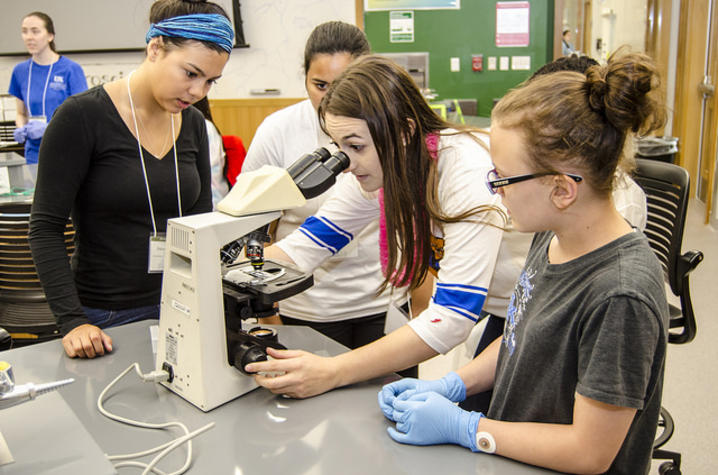 “I was surprised to find how smart and aware some of these girls are. Some of the things they were saying about the environment hadn’t clicked for me until my sophomore year of college. The future is bright!.” Mastoroudis said. “One of the girls told us that we inspired her to study the environment. That was when I understood the impact of my actions that day.”

The middle schoolers came from all walks of life, some with a fascination for insects, some interested in the medical field, others liked to build things. For some girls, it was their first experience with a university environment. Many of them were Sherry Blosser’s students at Henderson County North Middle School. Blosser, a sixth- and  seventh-grade science teacher, brought 45 students to the workshop. She opened up the trip to girls who were the most academically advanced and those who might have academic or discipline issues.

“We have so many girls who might not have the opportunity,” she said. “Maybe no one in their family has ever been to college, or they might have been on a college tour, but they haven’t taken a class in a college classroom. This, to me, is an opportunity for girls who are on a pivot point in their life.”

UK is the University for Kentucky. At UK, we are educating more students, treating more patients with complex illnesses and conducting more research and service than at any time in our 150-year history. To read more about the UK story and how you can support continued investment in your university and the Commonwealth, go to: uky.edu/uk4ky. #uk4ky #seeblue