By Jenny Wells-Hosley and Brad Nally 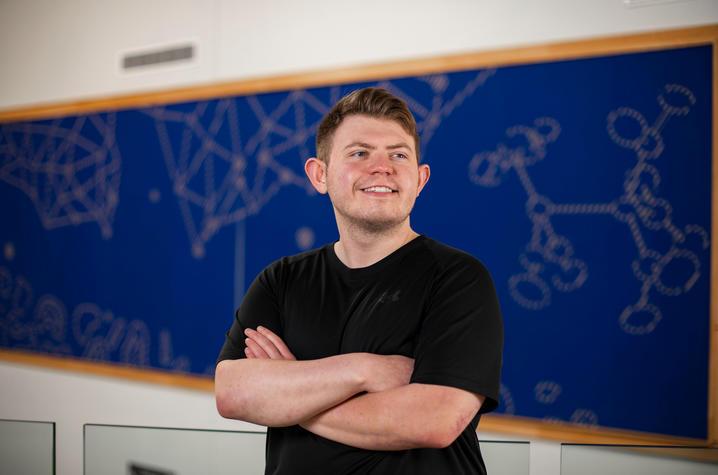 LEXINGTON, Ky. (May 7, 2021) — If you ask Matthew Farmer what inspired him to pursue a degree in chemistry, his answer is simple:

Farmer, from Harlan, Kentucky, would often play outside as a child, exploring his surroundings and observing how things worked in nature. For him, it wasn’t enough to be told that something “just happens” — he had to know the mechanisms behind why it happened.

“I became interested in chemistry because it deals with the minutia of how things interact with other things, and also themselves,” Farmer said. “Chemistry is the best way to explain how things happen at the ground level, and then work your way up.”

Farmer grew up knowing he wanted to become a scientist. But while in high school, he noticed there were misconceptions among his peers about what it meant to pursue a degree in STEM (science, technology, engineering and mathematics).

“People generally regarded STEM as pre-professional, so if you were going into STEM, you were going to be a professional, like a doctor or nurse,” Farmer said. “But I didn't really like that notion, because I know that as a country, as a society, for the world, we need more people to promote science, to do science, to teach science — all of those are subsidiaries of STEM.”

Farmer never lost his passion or scientific curiosity, which is what ultimately led him to the University of Kentucky, where he declared a major in chemistry. But like many college freshmen, Farmer struggled to find his footing early on — he didn’t always excel in the classroom setting and began to lose confidence.

“Some people do better in some classes than others; some find different subjects more interesting than others, especially in chemistry,” he said. “Finding what I thought was the most interesting type of chemistry, and how I could help people with that specific subset of chemistry, that was pretty difficult for me.”

Farmer eventually found his path through undergraduate research, which provided the scientific challenges and experimental settings he craved, along with the confidence he needed to excel.

“One of the biggest challenges I've had in my four years at UK was doing research and trying to push the envelope on learning and doing more,” he said.

Farmer spent the last two years at UK conducting research in the UK College of Pharmacy. He started his first year in pharmaceutical/physical chemistry, studying pharmaceutical solutions and drug absorption, before switching to biochemistry. He has spent the last year researching gene therapies to attenuate neuropathic pain caused by spinal cord injury. Both research programs resulted in multiple publications with Farmer as a contributing author.

He also decided to channel his passion for science into mentorship and outreach. As president of ChemCats, UK’s student chapter of the American Chemical Society, Farmer helped make chemistry inclusive for anyone who was interested in pursuing it.

“I faced many challenges in trying to find my footing, so when I can, I talk to other chemistry majors about what I've gone through and the challenges that I've faced, so they don’t feel alone and know that they can do it too,” he said.

Through ChemCats, Farmer was also able to take part in outreach projects in elementary and middle schools, encouraging younger versions of himself to pursue their dreams of understanding how and why things work.

“We showed students interesting and fun experiments to get them more intrigued by science and how it works,” he said. “I believe by showing students (young scientists, truthfully) how science works — and how fun it can be — we implant the why not me? attitude. The only thing a young scientist needs today to make their hopes come true is a drive.”

Next week, Farmer will graduate with his degree in chemistry from UK’s College of Arts and Sciences.

“Thinking about graduating from UK brings me a certain kind of pride because of where I'm from and how I've changed in the four years I've been here,” he said. “I used to not really know myself. I didn't have confidence. But through meeting people, through meeting faculty, and through doing research, I've just gained so much confidence. It's really night and day, genuinely.”

After graduation, Farmer will begin working as an analytical chemist for the UK College of Engineering’s Rare Earth Pilot Plant in Western Kentucky.

He credits his success to his undergraduate research experience — something he believes all undergraduates should try to do.

“I would not have had the amount of job offers I had unless I had this research experience,” he said. “There are so many faculty members across many departments that would love to help students progress in their career and give them an opportunity to learn. All it takes is one email.”

The University of Kentucky is increasingly the first choice for students, faculty and staff to pursue their passions and their professional goals. In the last two years, Forbes has named UK among the best employers for diversity, and INSIGHT into Diversity recognized us as a Diversity Champion four years running. UK is ranked among the top 30 campuses in the nation for LGBTQ* inclusion and safety. UK has been judged a “Great College to Work for" three years in a row, and UK is among only 22 universities in the country on Forbes' list of "America's Best Employers."  We are ranked among the top 10 percent of public institutions for research expenditures — a tangible symbol of our breadth and depth as a university focused on discovery that changes lives and communities. And our patients know and appreciate the fact that UK HealthCare has been named the state’s top hospital for five straight years. Accolades and honors are great. But they are more important for what they represent: the idea that creating a community of belonging and commitment to excellence is how we honor our mission to be not simply the University of Kentucky, but the University for Kentucky.
Tags:
chemistry
alumni