Behind a UK-owned House, Archaeology is Happening This Summer

Check out this gallery of photos from the dig. 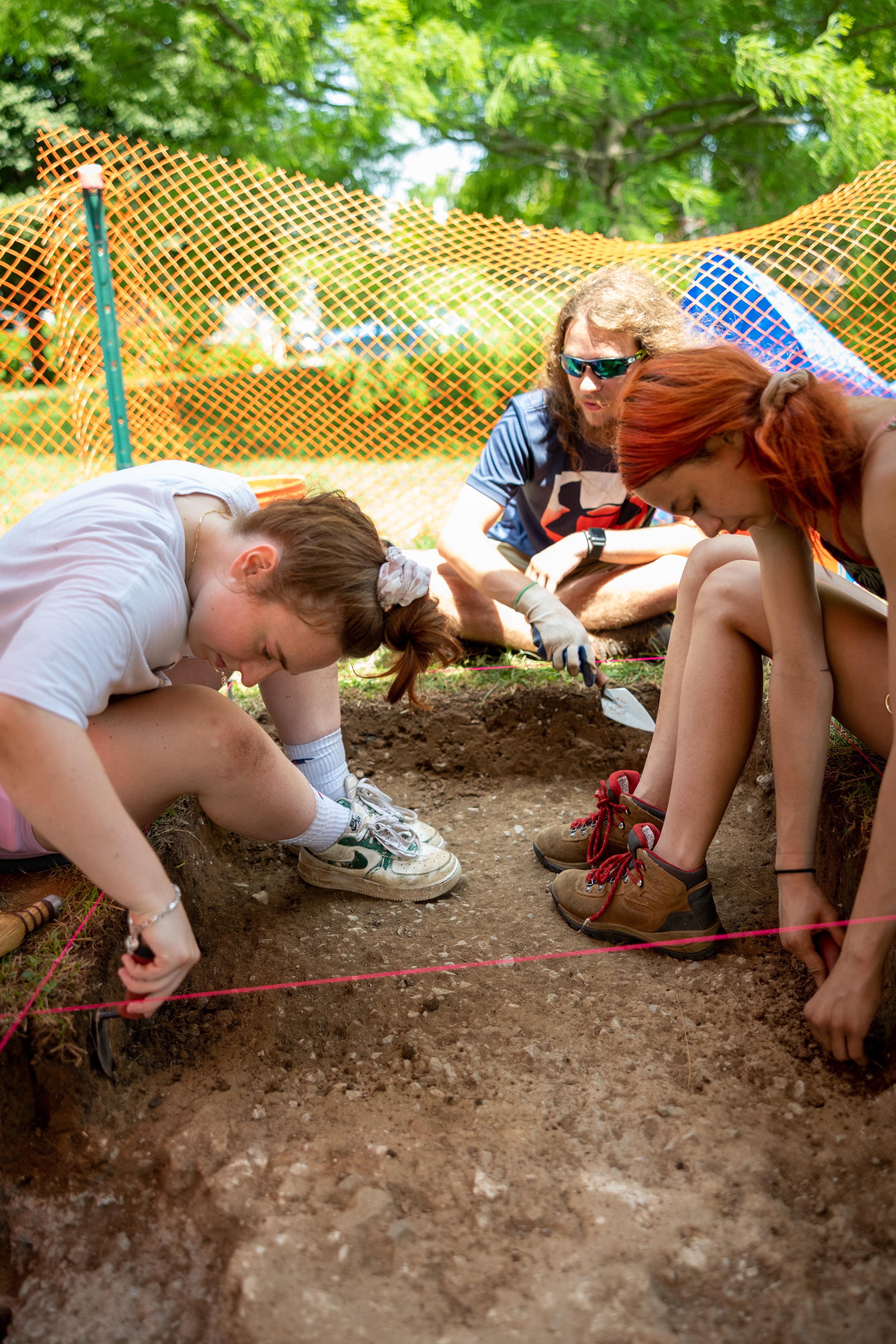 LEXINGTON, Ky. -- Behind the older but spiffed-up University of Kentucky buildings along East Maxwell Street, beneath a canopy, UK students methodically dig two orderly, rectangular and deep holes. In said holes, they find what seems to be the foundation of a former outbuilding, some 1960s pull-tabs from old soda cans, pieces of ceramics and shards of china and glass — treasures from a recent past.

“So far we found a lot of pieces of miscellaneously colored glass and random pieces of iron, like a nail or a hinge or a car part,” said Katie Reidy, a senior psychology major who’s in the class. “We found an L-shaped car part made out of iron, and we’ve found some old pull-tabs, too. It is cool to see this stuff – this is definitely not from the past 20 years.”

Such digging, sorting and identifying material as mundane-seeming as 19th century trash is essential to studying archaeology, according to Elena Sesma.

“You can certainly learn about archaeology in a classroom and from reading books and articles and from discussions,” said Sesma, assistant professor of anthropology, who’s leading the dig for a summer class in UK’s College of Arts & Sciences along with doctoral student James Keppeler. “But it's a really hands on field. You can read about the methods of excavation, but you also need to actually put a trowel in the hands of students and teach them how to remove soil, how to sift soil and identify artifacts. That takes training.”

The class she’s teaching, Anthropology 585, this summer involves digging behind buildings which have had multiple purposes over the years — homes, sororities, boarding houses and finally UK offices. UK has a great deal of documentary history about the area, which helps Sesma and her cohort guide their exploration. Sesma has led her students into the UK archives to look at maps, deeds and aerial photos.

“Having an idea of who was living there, what their occupation was, how long they lived there — all of that can change our expectation of what to find,” she said “A student living in that building might leave a very different kind of material trace than a family who's lived in that house for generations.”

In early June, when digging started, Sesma and her class were working under a tent with two teams going after two square holes. Early in the dig, the students could tell they had reached into the 1970s and ‘80s because they found gravel from a driveway that a lawn has since replaced.

“We’re working in one-by-one-meter-squares,” she said. “We’ve put those excavation areas roughly in places where we expect to find the foundations of some of these outbuildings. We have hit a couple of building features, and we've hit a couple of things that look like they could be related to one of these buildings, either as the floor or a trash pit associated with them.” 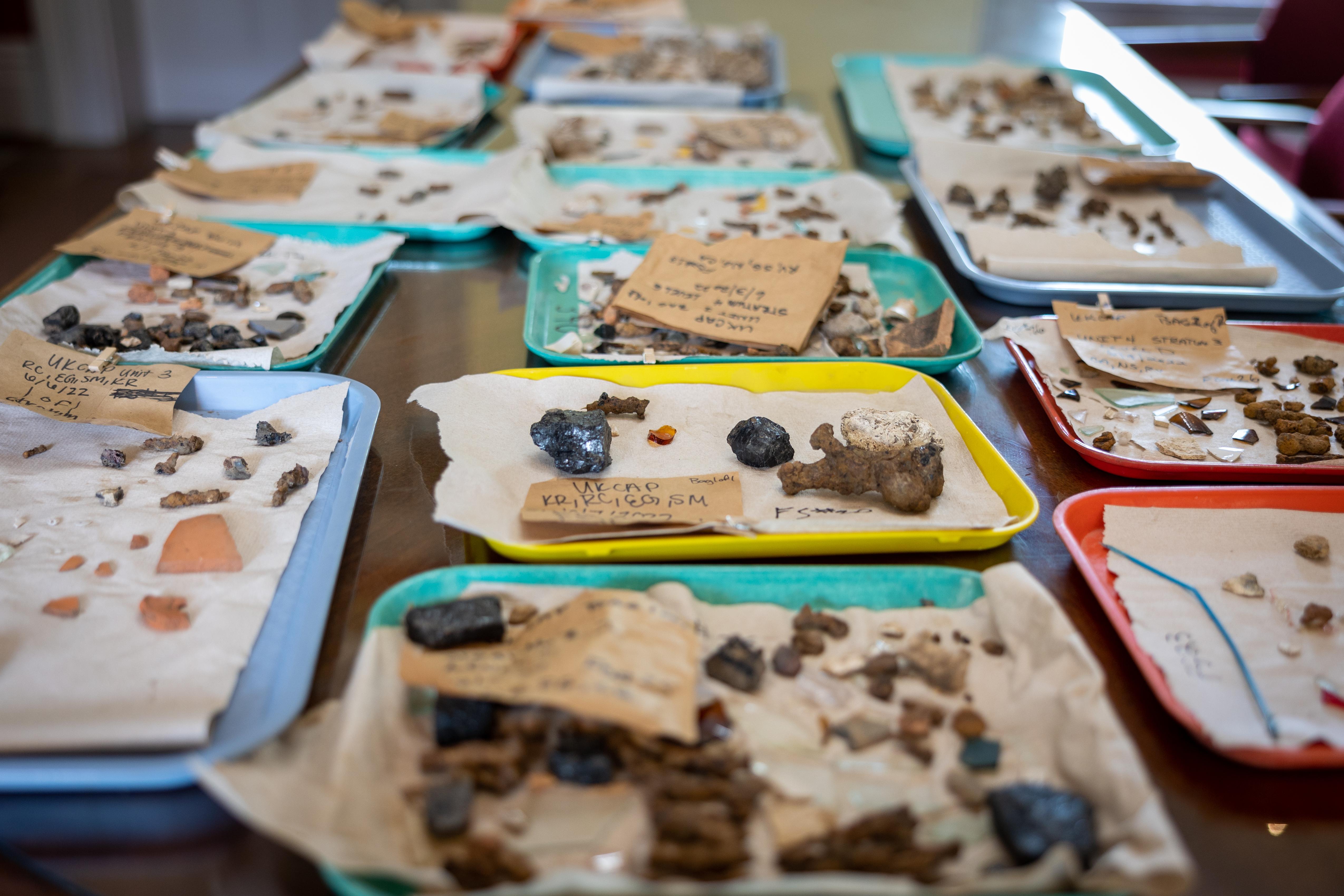 As an historical archaeologist and anthropologist, Sesma is interested less in the monuments that people leave behind and more in the everyday things that they discard: Those items can reveal what everyday life was like in the past, which here means the 19th and 20th centuries. Finding a trash midden can lead to a whole pile of knowledge.

“We can learn things like what did they eat, how did they prepare their food, what was their social interaction like with their neighbors with the community,” she said. “That’s one reason that archaeology can be great. It can tell us about what these people ate off their plates or how you shared your tea with your neighbors or whether you invited them over for a barbecue. All of that leaves a material residue. We can use even the smallest pieces of broken ceramics or glass to give us insight into what it was like for the people who lived here on a day-to-day basis, as well as these big questions about how the landscape and land usage change over time.”