Physics & Astronomy alum Dr. Anjan K. Gupta came to the University of Kentucky after earning bachelors and masters degrees from the Indian Institute of Technology in 1995 in Kanpur, India. 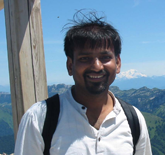 Anjan is from a small city called Etawah in Uttar Pradesh, the most populated state in India.

“I wanted to go to the United States because I knew there would be many opportunities for research as a graduate student,” Anjan said. “I applied many places but I was interested in UK because they had a good condensed matter experimental department. I knew that’s what I wanted to pursue.”

Anjan said he found good teachers and mentors among the faculty in the physics and astronomy department, particularly Dr. Joseph Brill and Dr. Kwok-Wai Ng.

“It was a wonderful experience and I’ve kept in touch with some of my professors at UK,” he said.

After earning his Ph.D. from UK in 2001, Anjan went to Grenoble, France to complete his postdoctoral work. While there, he was involved in developing a scanning probe microscope that can be used for studying some hybrid surfaces.

In May 2003, he accomplished his goal of getting a position back in his native country as an assistant professor at the Indian Institute of Technology.

In 2007, he worked on a project that received a patent for a two dimensional nano positioner. Anjan said a small company is looking into whether the equipment can be sold commercially.

Six years after returning to India, he was promoted to associate professor in the physics department. He has taught a variety of classes including courses in quantum physics and superconductivity.

He has also worked with doctoral students on their thesis. He said he enjoys sharing his love of physics.

“I wanted to do something where I could work with my hands and physics has always fascinated me as a subject,” Anjan said. “I think it’s very exciting to be part of figuring things out about physics.”

But the field is as challenging as it is interesting, he said.

“You have to really like what you do because it can be so difficult,” Anjan said. “You really put your heart and time into it. You must consider this when you pick your career.”