This project was motivated by an in situ heating experiment in the transmission electron
microscope (TEM) in which gold (Au) nanoparticles were observed to dissolve tin dioxide (SnO2)
nanowires (NWs) under vacuum. The explanation for this observation was that the hightemperature
and low-pressure environment of the TEM caused the reverse reaction of the wellknown
vapor-liquid-solid (VLS) method commonly used to grow NWs. In the VLS process, a
metal catalyst absorbs reactant vapor until it becomes supersaturated. The precipitation of the NW
occurs at the liquid-solid interface, which ceases when there is no longer reactant vapor, and the
diameter of the NW is determined by the diameter of the original catalyst. The reverse process, the
solid-liquid-vapor (SLV) method occurs when atoms in a solid NW diffuse into the metal catalyst.
Eventually, the metal catalyst becomes supersaturated and the vapor escapes at the liquid-vapor
interface. In this dissertation we demonstrate the combination of the SLV and the VLS mechanisms
to create embedded heterogeneous interfaces in a variety of metal oxides. Metal catalysts are first
used to etch metal oxide surfaces producing hollow channels that we term “negative nanowires”,
and after etching the metal catalyst is reused to grow a NW of a different material from within the
channel to form a crystalline interface. Understanding the chemical structure at these interfaces is
both crucial and fascinating because diverse materials may interact in a variety of ways, including
atomic mixing of the two structures and/or the formation of an abrupt crystalline interface or gap.
We present our approach, therefore, towards gaining a comprehensive understanding of the
structure-function relationship of these materials, focusing on particular on the interfacial region,
to allow the design of new nanomaterials with tailored functionality. 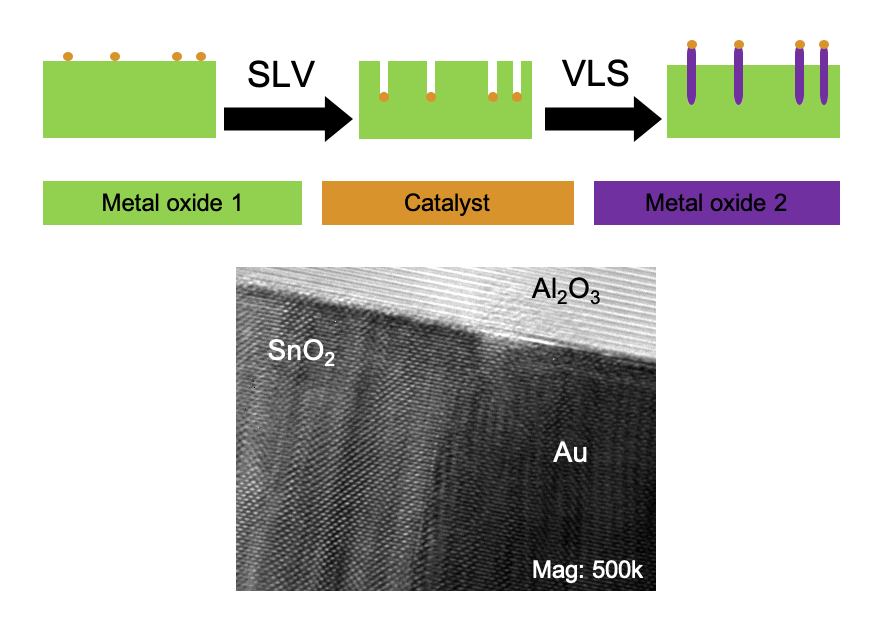