From old time Kentucky tunes to a band’s unique take on art, the next two concerts in the "Appalachia in the Bluegrass" series are sure to cater to a wide audience. The first concert, featuring the Red State Ramblers, will be presented noon Friday, Nov. 30, in the Niles Gallery, located in the University of Kentucky Lucille C. Little Fine Arts Library and Learning Center. The final concert will feature Anna Roberts-Gevalt and Elizabeth LaPrelle introducing local audiences to the artform known as "crankies" at noon Friday, Dec. 7, at Niles Gallery. Both programs are free and open 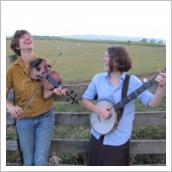 The Red State Ramblers features native and adopted Kentuckians playing Kentucky tunes and songs. The Ramblers, all alumni of UK, are comprised of Will Bacon, on banjo and kazoo; Kevin Kehrberg, on bass and guitar; Jeff Keith, on mandolin and guitar; and Nikos Pappas, on fiddle. Bacon and Keith grew up in the Bluegrass state, while Pappas and Kehrberg were inevitably drawn to the Commonwealth several years ago.

In 2008, the Red State Ramblers were a finalist in the string band competition at Clifftop Old Time String Band Festival. Recently the ban released their second recording, "Commonwealth," based on traditional music of the state of Kentucky.

Keith and Kehrberg currently serve as professors at Warren Wilson College. Pappas has been recently added as assistant professor of music at the University of Alabama. Bacon is the owner of a contracting firm, BaConstruction.

This performance is a special reunion of the Ramblers, who have traveled a "fur piece" to reunite at Niles Gallery in order to help close out the series as they have every year since "Appalachia in the Bluegrass" has been presented at the Niles Gallery. This past year they have performed in Kyrgyzstan and Ecuador on U.S. State Department-sponsored musical tours.

To hear a performance by the Red State Ramblers on their recent tour of Ecuador with Ron Pen, director of the UK John Jacob Niles Center for American Music, go to http://youtu.be/hl8_J3gOAKM.

Anna Roberts-Gevalt and Elizabeth LaPrelle met in 2010 and soon began planning adventures together. They use all the creative tools they can think of: storytelling, research, fiddle, banjo, guitar, ballads, puppets, poetry and moving scrolls called "crankies." They are trying to engage themselves and their audience with traditional art in all the forms it can take — from canning to woodcuts, quilting to singing, all to better express the rich stories this region has to offer.

LaPrelle has been performing Appalachian ballads and old time songs since she was 11. Raised in Rural Retreat, Va., LaPrelle attended old time fiddlers' conventions and sang harmonies with her family, who taught her traditional singing styles and encouraged her to sing their own favorite American folk music. She received her undergraduate degree from the College of William and Mary with a major in Southern Appalachian traditional performance. LaPrelle now tours the U.S. regularly both performing and teaching.

Roberts-Gevalt, a graduate of Wesleyan University in Connecticut, grew up in Vermont playing violin in a youth orchestra and in string quartets. Through recordings at college she was drawn to Appalachian fiddle and banjo tunes. This interest led to an internship at Appalshop in Whitesburg, Ky., during the summers of 2007 and 2008. This work included archival research at Berea College, East Tennessee State University, the Library of Congress, as well as hands-on experience at the Cowan Creek Mountain Music School, which puts banjos and fiddles in the hands of eager school age children.

You can listen to a sample of Roberts-Gevalt and LaPrelle's music at http://youtu.be/3xt7t-T9wpk.

Presented by the John Jacob Niles Center for American Music, the "Appalachia in the Bluegrass" concert series celebrates the old time roots of American folk music by featuring a diverse range of traditional musical expression. This year's concert series showcased 13 different performers, duo and groups from the Kentucky area ranging from artists straight off their front porch to those who have earned international acclaim. The Niles Center is a collaborative research and performance center of the UK College of Fine Arts, UK School of Music and UK Libraries.

For more information on either the Red State Ramblers or Anna Roberts-Gevalt and Elizabeth LaPrelle program, or on the "Appalachia in the Bluegrass" concert series itself, contact Ron Pen, director of the Niles Center, by email to Ron.Pen@uky.edu or visit online at http://finearts.uky.edu/music/niles.