In the 1930s, the Dust Bowl and the legacy of massive post-Civil War cut-out-and-get-out logging and, particularly in the south, of what amounts to shifting cultivation brought a soil erosion crisis to the attention of the USA and the world. In the 1980s, a realization that problematic erosion persists despite great improvements in soil conservation and a heightened concerned with nonpoint source pollution from agriculture brought renewed attention to erosion, this time focused particularly on off-site impacts. On-site impacts of soil erosion are the environmental degradation and lost productivity due to soil loss, while off-site impacts are related to pollution and costs associated with where the soil ends up. Now, we are at it again, with another wave of attention to soil erosion.

A recent meta-analysis of global soil erosion rates by a group of Spanish geomorphologists and soil scientists in Geomorphology reveals a surprising amount of variability in measured and estimated erosion rates that has generated a great deal of discussion. And physical geographer Frans Kwaad (University of Amsterdam) has reinvigorated discussion of the relative onsite and offsite impacts of erosion. Finally, loss of peat soils to fire and drainage has led Indonesia to offer a $1 million prize for developing a method to quickly and accurately map the country’s peat soils. 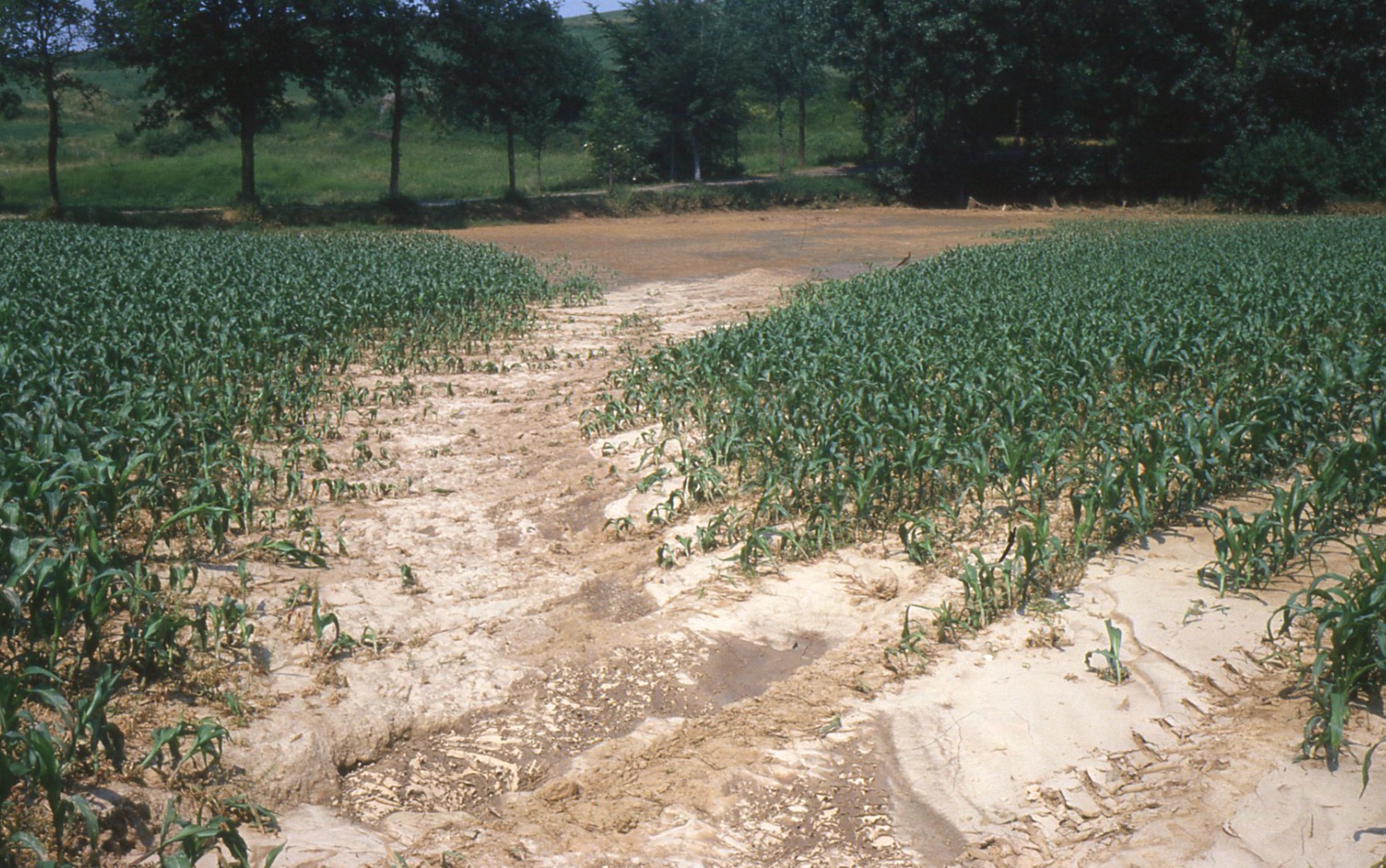 The meta-analysis by Garcia-Ruiz et al. (2015) considered published data from >4000 sites worldwide, finding that “there is extraordinarily high variability in erosion rates, with almost any rate apparently possible irrespective of slope, climate, scale, land use/land cover and other environmental characteristics.” In general, results do not refute the known relationships of water erosion with precipitation, topography, and land use, but the amount of scatter is enormous. More tellingly, Garcia-Ruiz et al. found that apparent rates vary with the method used to measure or estimate soil loss, size of the study area, study duration, and time scale considered. From their abstract:

“ . . . the data suggest that only order of magnitude approximations of erosion rates are possible, and these retain a very large degree of uncertainty. Consequently, for practical purposes such as calculation of global sediment budgets, empirical equations are not a substitute for direct measurements. Our results also show that a large proportion of the experiments have been short-term (less than 3 years), which reduces dramatically the reliability of the estimated erosion rates, given the highly non-normal behavior of soil erosion (time-dependency). Despite the efforts already made, more long-term measurement experiments need to be performed, especially in regions of the world that are under-represented in global datasets.” 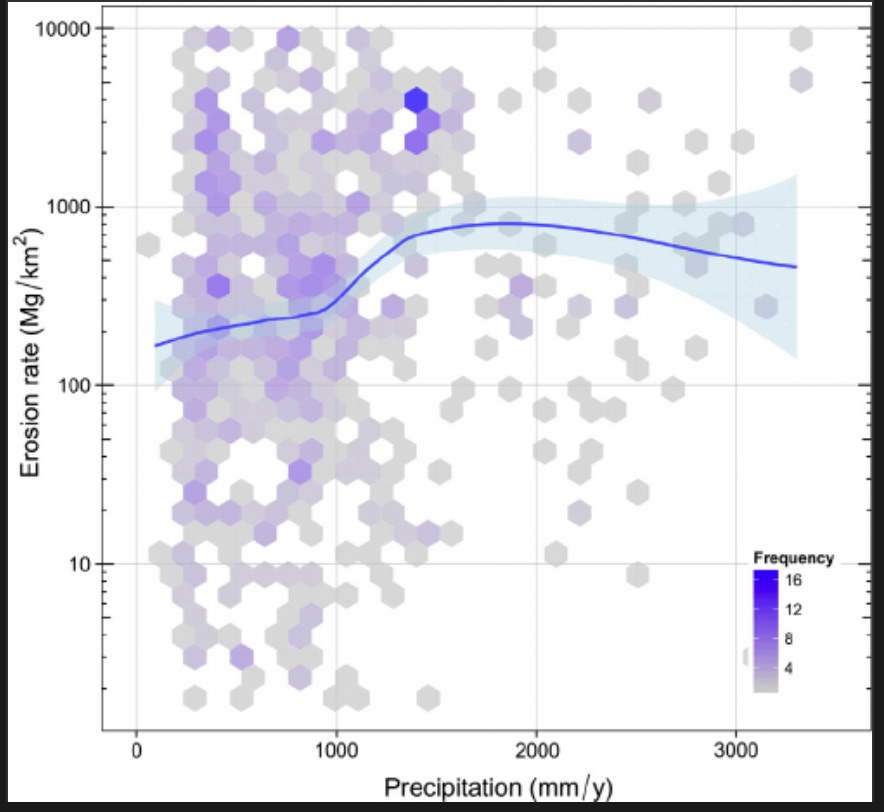 The paper contains the usual call for more data, and the equally usual plea for standardized measurement and reporting procedures. However, in this case there is a better-than-usual case for such calls.

But let me add a few caveats.

First, while Garcia-Ruiz et al. (2015) cast plenty of legitimate doubt on our global-scale understanding of soil erosion rates, that does not necessarily question or invalidate individual studies in context. For instance, you can (and should) question whether erosion-plot results from a cornfield in Ohio measured over two years are comparable to profile truncation estimates covering a 100-year period in North Carolina. But if the studies in question are competently conducted, then you have good data on plot-scale soil loss from a cornfield in a particular 2-year period, and on net soil surface lowering over a century.

Second, don’t let the results make you think we don’t understand erosion causes and processes. We do. There is, of course, always more to be learned, but the basic mechanisms are well understood, and can generally be worked out pretty well for any given situation. The problem is that those situations are extraordinarily variable, and it is thus difficult to generalize from one site to another.

Third, the results underscore the geomorphic folk wisdom that the answer to every question is “it depends on the scale.” With respect to time scales and study durations, we have long known (for a variety of geomorphic processes, not just soil erosion) that longer periods generally yield lower mean rates. This is because the longer the time period, the more likely it is to include periods where nothing much is happening. With respect to area, and spatial scale, it has also been known that soil loss is dominated by hotspots of high erosion, and that within a watershed a small proportion of the drainage area produces a large proportion of the sediment. If you are measuring a hotspot you’ll get high rates, and otherwise you’ll get lower rates. If you sample or measure a large area, the cumulative results will underestimate the hotspots and overestimate the rest. Also, the larger the area the more opportunity there is for temporary storage of eroded sediment, and thus the measurement technique comes into play—measurements of local removal may overestimate the amount of soil leaving the area, while measurements of output from the entire area will underestimate local soil loss.

No matter what technique you use, or what numbers you get, or how certain you are of those numbers, this area of the Rif Mountains, Morocco, has an erosion problem (F. Kwaad photo).

*”Problem” assumes that the erosion is detrimental to human interests and/or ecosystem services. Certainly erosion occurs naturally, and sometimes with no net adverse impacts. From a purely scientific perspective, you could substitute “accelerated erosion” for “an erosion problem,” with accelerated indicating removal rates well in excess of soil formation or upbuilding rates.

NEXT: onsite vs. offsite costs.